The Compounding Power of Atomic Habits# 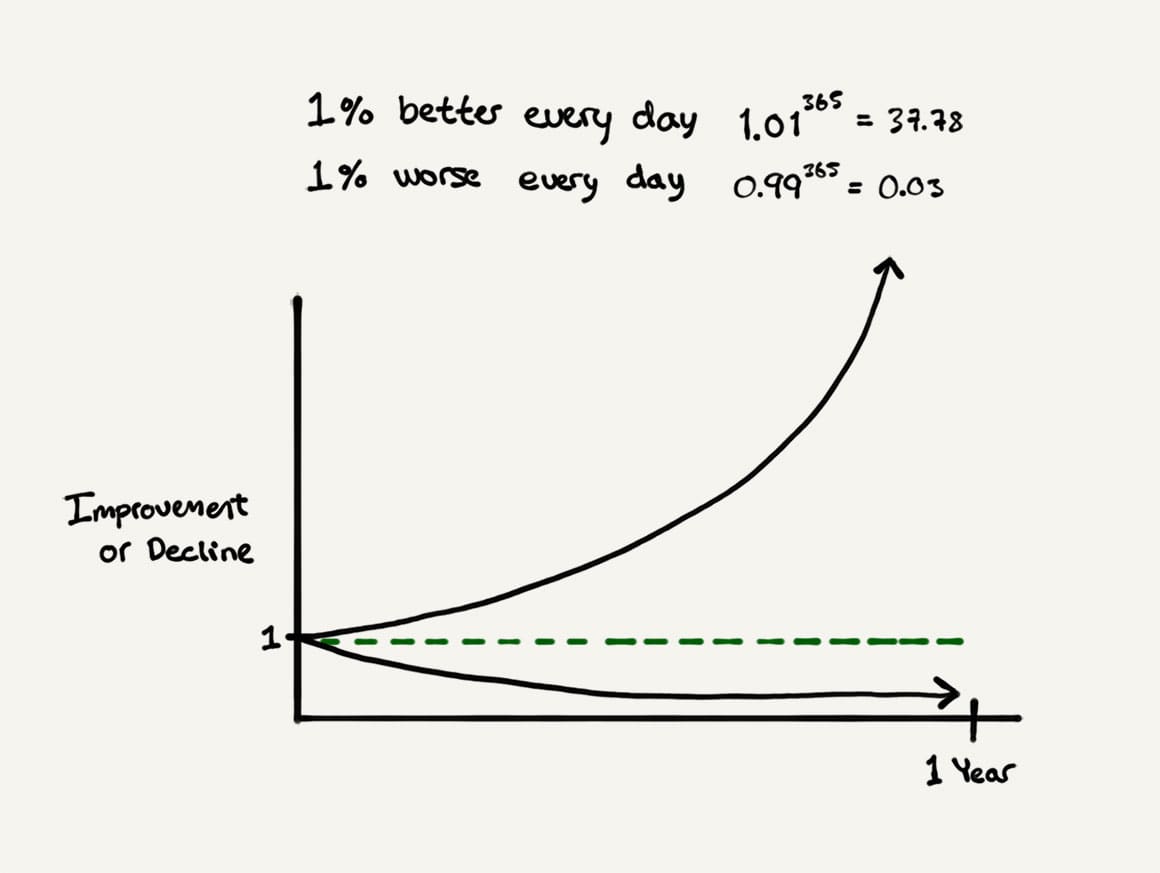 A bamboo takes 5 years to establish an extensive network of roots underneath before it starts to grow from the ground up, after that it only take it 6 weeks to reach 90 feet (~27 Meeters) into the air.

This is the case for bad habits as well. If you are having a chronic back pain, chances are it have not developed overnight as it is apparent. It may be the result your sitting habits and all yoga or workout you did’nt to do everyday that have created a compounding effect of bad habits which have caused that chronic pain.

The time period in which you see no apparent effect of your action.

When there is no short term reward for the tiny directions or actions you take, people will often get demotivated. When you fail to see a tangible result, you decide to stop. In order to make meaningful difference, habits needs to persist long enough to break through this plateau — what James Clear calls the Plateau of Latent Potential

If you find yourself struggling to build good habits or break bad ones, you have not yet crossed the Plateau of Latent Potential

When nothing seems to work, the author watches a stonecutter hammering a stone to break it. He might have taken 25 hits to finally break it. We know that it is not just the 25th hit that have broken the stone, but all that have gone before.

Goals are good in setting a direction, but systems are best for making progress. We often waste awful lot of time setting goals. And very little time designing a system that can help us achieve those goals.

Problem #1: Winners and losers have the same goals#

If successful and unsuccessful people share the same goals, then the goal cannot be what differentiates the winners from the losers.

Problem #2: Achieving a goal is only a momentary change#

Imagine you have a messy room and the goal is to clean the room. And one day you summon the energy to clean it, then you’ll have a clean room - for now. But if you maintain the same sloppy habits that led to a messy room in the first place, soon you’ll be looking at a pile of clutter and hopping for another burst of motivation.

You are left chasing the sane outcome because you never changed the system behind it. You treat the symptom without addressing the cause. The cause is your unorganized behavior. What you should be addressing is to create a system to be organized.

The implicit assumption behind a goal is that: Once I achieve my goal, then I will be happy. The problem with this goal first mentality is that you are continually putting happiness off until the goal is achieved. Either you achieve your goal and are successful or you fail and you are disappointed.

When you fall in love with the process rather than the result, you can be happy anytime and every time your system is running.

Problem #4: Goals are at odds with long-term progress#

You find people often themselves reverting to their old habits after they accomplish a goal. Take the above example of a clean room

The purpose of setting a goal is to win the game. The purpose of building system is to continue playing the game. True long-term thinking is goal-less thinking. It is not about a single accomplishment, but a cycle of endless refinement and continuous improvements.

Own your behavior so that you can change it#

Imagine you are a smoker and want to quit smoking. When someone offered a cigarette you refused by saying either of the below two response.

The person giving the first response actually believes that he is a smoker. And have created that belief have come from the identity he have created.

In the second response the person actually does not identifies with someone who smokes. It is part of their former self and he is not that person anymore.

There are three layers of behavior change

The more you repeat a behavior. The more you re-enforce the identity associated with that behavior The most effective way the change your habits is to focus not on what you want to achieve, but on who you want to become

How to build habits#

All habits proceed through four stages in the same order:

How to creating new habits#

How to breaking bad habits#